Show and hotel: “California Suite”, at the Richmond Hill Barn Theater until August 26

“Welcome to Hotel California,” sang the Eagles as the lights went out during Thursday’s opening night performance Californian Suite at the Richmond Hill Barn Theatre. It was the perfect – and, let’s be honest, the most obvious – song choice for this straightforward production of Neil Simon’s comedy.

Written in four separate acts, California suites only crossing is its location, which houses various guests of the luxurious Beverly Hills Hotel’s suite 203/204. Pleasantly constructed by Mike Skiles, this suite features a living room and bedroom, separated by a raw half wall, which worked beautifully for this production. Simon’s comedy was written in 1976, and Jennifer Kingry’s musical design helped cement the ’70s vibe. However, the characters introduced by director Dana Skiles were of a more timeless variety, which made the more relevant night.

Right away in ‘Visitor from New York’, before anyone else joined her on stage, Jessica Moore’s Hannah Warren – first seen on the phone – was so unlikable it became clear why ex-husband William (the strangely calm Nicholas Waldbusser) has divorced. , and why their daughter Jenny ran across the country to get away from her. Moore’s cocky voice was, to me, like hearing nails on a blackboard, and Hannah, who was from the East Coast, clearly elicited a similar negative reaction from William. It was Simon’s fault, of course, but starting a production on such a low note meant I had to check my schedule to make sure this comedy was meant to be. be a comedy. With the Warrens so bitter towards each other, this vignette was cold and sad, and the fact that the actors rarely used the bedroom portion of the suite added to the stagnation of the scene.

You know the tension in the audience is high when a flush provokes laughter, so it was no surprise that Californian Suiteis next The “Visitor from Philadelphia” segment, with its ridiculous sitcom, became my favorite of the evening. Matthew McConville plays the incredibly hungover Marvin, who wakes up to find Bunny (the charming but quiet Dee Raver) unconscious in his bed. Marvin doesn’t remember anything from the night before, and as he is unable to wake the drunken bunny with his wife Millie (Elle Winchester) on the way to the bedroom, Marvin’s logical brain flies out the window as panic mode moved in – and it was really funny. Winchester demonstrated excellent comic timing, and paired with the endearing McConville, the two effortlessly made the best couple of the night. (Even given their issues, namely the lady of the night in that bed, I think Marvin and Millie will have a golden anniversary.)

Oscar-nominated Jackie Patterson’s Diana as she and husband Sidney (Jason Schaad) head to the ceremony at the start of ‘Visitors from London’ kept it classy. Patterson had a few tongue trips Thursday, but that’s easily explained by the Oscar nominee’s nerves before the awards show — and then, after Diana returns to the sequel, she’s three sheets to the wind. Diana and Sidney’s marriage of convenience, in truth, was slightly depressing, and I would have liked to see more camaraderie between Patterson and Schaad. But the characters’ lack of motivation to indulge at least led Diana and Sidney to some of the production’s best verbal jabs and heartfelt conversations. 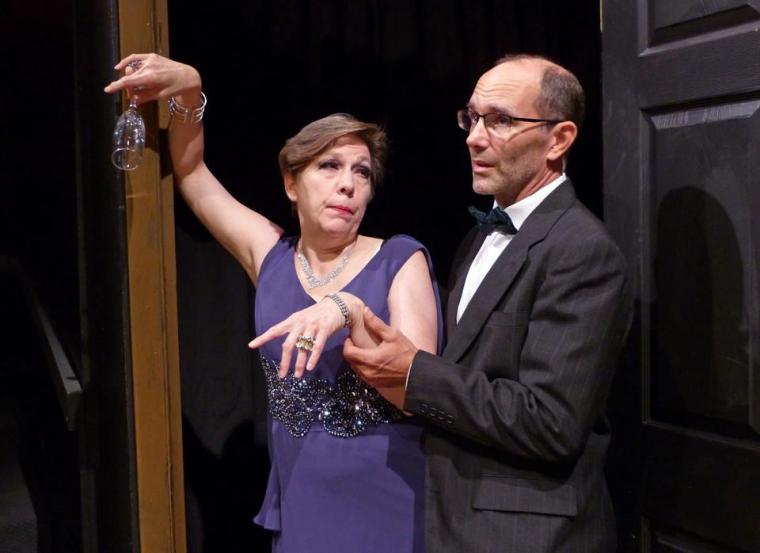 Director Skiles brought back some familiar faces for “Visitors from Chicago,” and this one-act showcased some of the best uses of space the night had to offer. With four people in the hotel suite instead of the usual two, it offered varied directing possibilities, although the piece belonged to Waldbusser and Moore, reappearing as Mort and Beth Hollender. The play opens with Beth having injured her foot during a game of tennis and their friends and traveling companions Stu and Gert (McConville and Winchester) coming to see her, and here Simon’s characters are needy and a slightly crazy, the two couples seeming to be pitted against each other.

The situation escalates into a giant physical hubbub, and I don’t think anyone expected the WWE “Visitors from Chicago” style wrestling experience to deliver. But the boos and screams from the audience were the loudest of the evening. Waldbusser really came out of his shell during this segment; half the size of McConville, I was certain that Mort’s sheer passion made him a lock to win their battle. And while Moore’s Beth is as whiny as Hannah, on this occasion she turned out to be funny instead of boring, and paired with Winchester yet again funny, the performers kept the humor, ending at this Californian Suite on a positive note.

During intermission, I overheard a few patrons discussing how difficult they were to hear the actors. But I, personally, didn’t miss a word, and with the Richmond Hill scene easily turning into Beverly Hills, the venue delivered an enjoyable and fun production.